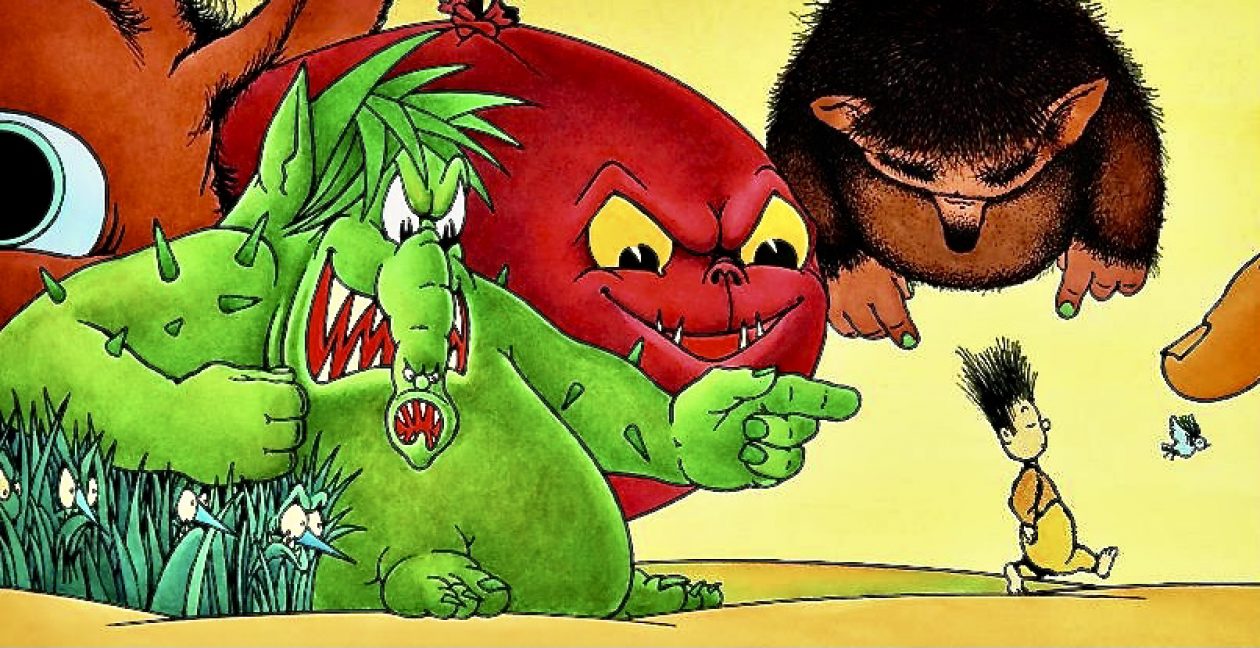 “Do you know where Emma is?” Oliver asked Tommy One Shoe.

Tommy pointed to Lake Erie, to where Emma was trying to get into a canoe without tipping it over. She got one leg over the gunwale, heaved herself upwards, and tipped the canoe over. She fell backwards with a plop.

“She’s trying to build up her bravery so the next time she’s hunting monsters with you, her knees won’t turn to jello.”

Tommy One Shoe was called that because he came to school one day wearing only one shoe. “I forgot the other one,” he explained but every time he explained everybody broke out laughing. He couldn’t live it down after that, no matter how many times he went to school wearing two shoes.

When Emma finally got into the canoe, she shook the water out of her hair like a dog. She practiced her paddle strokes sitting and kneeling. She tipped the canoe over on purpose and swam under it, where there was a pocket of air. She pulled it to shore, which took most of her might. Tommy and Oliver helped her tip it over again to get the water out of it.

Emma was a sensible girl and wasn’t afraid of much. But like any sensible person, she was afraid of monsters. Sometimes she had nightmares about them. Oliver on the other hand, wasn’t sensible at all. He fought foiled captured monsters all the time. She threw herself down on the warm beach sand and the sun started drying out her swimsuit.

“Hey sis, can I use your canoe?” Oliver asked.

Oliver had his monster hunting gear with him.

“Where are you going?”

“Out there,” Oliver said. “One of the irregulars spotted He-Man Hedora. I want to make sure he’s just passing through.”

“I’m going with you,” Emma said. “I’ll paddle. I’ve been practicing all morning.”

Oliver was the Unofficial Monster Hunter of Lake County. The Monster Hunter Irregulars were 4 and 5-year-old kids in the neighborhood who kept their ears and eyes open for monsters. They reported directly to Oliver. Emma was his right-hand man.

He-Man Hedora was the son of Hedora the First. He lived in Sugura Bay just like his dad had done. He never went near Mount Fuji, where Hedorah fought Godzilla to the death. The First came from the Dark Gas Nebula, landing on earth as a tadpole, eating pollution and growing to be a big-time monster. When he fought Godzilla, he was on the verge of killing “The King of the Monsters” but at the very last second Godzilla used his atomic fire breath to activate electrodes on Mount Fuji which crippled Hedorah. Godzilla caught his breath. The next second he incinerated his enemy, turning him into a heap of charcoal.

The strong wind on Mount Fuji blew the charred remains away.

Japan gave Godzilla a gold medal because Hedorah had been rampaging up and down the country. What nobody knew was that he left a chip off the old block behind. When he grew up, he became He-Man Hedorah. He swore revenge on Godzilla.

He was purple with red eyes and long eyelashes. He was like a gigantic blobby octopus. He swam most of the time, but had two legs and could fly, too. He ate sludge morning noon and night. He spit out sulfuric acid globs that looked like melted mozzarella cheese and he could exhale toxic mist clouds that stopped everything in its tracks. There was a crack in the top of his head.

“When Hedorah gets super mad his brain pops out of his head,” Oliver said. “If he acts up, I’m going to try to get him to blow his top. No brains no trains is what I always say.”

They shoved off, Emma paddling and Oliver keeping his binoculars trained on He-Man, who looked like he was taking a floating nap. When they got close to him Oliver used the spare paddle to poke the sleeping beast. One of He-Man’s eyes blinked open. Oliver used the paddle to tap out a message in Morse code on his stomach. All monsters knew the dot and dash language.

“We’re in charge of monsters here,” Oliver said. “Is there anything we can do for you before you leave and don’t ever come back.”

He-Man’s eyesight was bad. He leaned down to see who was tapping on him. When he saw it was Oliver, he was both amused and outraged that a pipsqueak had poked him and was telling him in so many words to leave town.

“Who you be?” he growled in octopus talk. Oliver had taken a crash course in the language of octopi and understood the monster.

“I keep our corner of Ohio safe from monsters,” Oliver said.

He-Man’s blood pressure went up. Not only was the runt threatening him he was saying he had the power to make him do his bidding. How could that be? The boy and girl in front of him were small fry. He could get rid of them with one spit of a sulfuric acid glob.

He-Man didn’t know what he was thinking most of the time. He wasn’t a mind reader. How could the Ollie in the canoe know?

Oliver pulled a two-foot length of stainless-steel pipe out of his knapsack. He had borrowed it from his dad’s stuff in the garage. He hadn’t asked his dad but was sure he wouldn’t mind as long as he didn’t know anything about it. He was doing his darndest to not drop it in the lake.

“Do you know what this is?”

“I know you don’t know so I’ll tell you. This is an A1000 Energy Creating Monster Destroyer. It’s the latest model. If I flick it on it will generate a trillion volts. If I stick it in the water, you’ll be lobster for the dinner table in one second.”

He-Man couldn’t count that high. Four was as high as he had ever gotten. He had no idea what trillion meant, although he didn’t like the sound of it. He knew what volts were, however. He was nervous about the idea of electricity and water mixing with him smack in the middle of the mix.

Oliver held the pipe up high and got the sun cutting through the fog to reflect off it. It made He-Man squint. He was so mad he felt like his head was going to explode. Then it exploded. His brain went flying out of his head and made a splash when it landed in Lake Erie. Oliver leaned over and scooped it up with a fishing net, almost capsizing the canoe.

“This is bigger than I thought it was going to be,” he said, rolling the pineapple sized brain in his hands. He threw it back to He-Man.

“Now scram and take your mean old brain with you.”

The monster started kicking his legs floating on his back, got going, and then went airborne. He was a speck in the sky before long and then he was all gone. Oliver was putting the stainless-steel tube back in his backpack after they rowed to shore when Emma reached out and grabbed it.

“Hey, this isn’t any kind of a destroyer,” she said. “It’s just one of dad’s scraps. You weren’t being brave. You were just bluffing.”

“There’s a fine line between bravery and bluffing,” Oliver said. “I was bluffing but I was being brave, too. Bravery is being the only one who knows you’re afraid.”

Ed Staskus posts feature stories on 147 Stanley Street http://www.147stanleystreet.com and Cleveland Daybook http://www.clevelandohiodaybook.com. To get the site’s monthly feature in your in-box click on “Follow.”